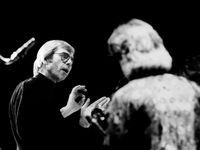 Robert Edward “Bob” Brookmeyer (1929–2011) gets the tribute he so richly deserves this week when Ryan Truesdell conducts an all–star big band in four sets of music composed and/or arranged by the valve trombonist, pianist, and eight–time GRAMMY Award nominee. Born in Kansas City, Missouri, Brookmeyer first gained widespread public attention as a member of Gerry Mulligan's piano-less quartet from 1954 to 1957; later collaborators included Jimmy Raney, Zoot Sims, and Stan Getz. As a leader, Brookmeyer released albums on Prestige, World Pacific, Mercury, Atlantic, and United Artists (including The Ivory Hunters, an LP of piano duets with Bill Evans). “It’s a rare occurrence to have complete pro­grams of Bob’s music played in New York, the city that was his home for much of his career,” says Ryan Truesdell. “These Jazz Standard concerts will honor what would have been Bob’s 90th birthday (12/19/2019) and will consist of music that he wrote throughout his career, most notably for his European–based New Art Orchestra, for Mel Lewis & the Jazz Orchestra, and for Gerry Mulligan’s Concert Jazz Band, plus vocal arrangements from Bob’s final album Standards (ArtistShare, 2011). Many of the band members have personal connections to Bob Brookmeyer and his music, and played with him in a variety of settings.